The Wisconsin Badgers are a college basketball team based on Madison, Wisconsin. 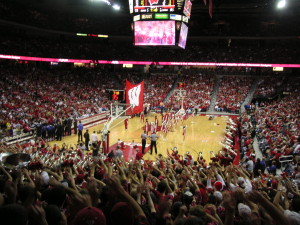 In the semifinal game, on April 5, 2014, the Badgers played against the Kentucky Wildcats. The Badgers did good in that game, and had the lead at halftime. Unfortunately, Kentucky would win by just 1 point, the the final score of 74-73.

Kentucky went to the national championship game vs the Connecticut Huskies. Unfortunately, Kentucky would lose 60-54.

Next season, the Badgers played better and again made it to the Final Four. They would again face Kentucky on April 4, 2015. But here was the problem: Kentucky was doing super well and was then undefeated. So the Badgers would have to play their very best.

Both teams did super well in that game. Luckily, Wisconsin would win 71-64.

And so, on April 6, 2015, Wisconsin and Duke played in the championship game. Since Duke lost more games than Wisconsin, and Wisconsin had defeated so many mighty teams, it looked like Wisconsin could have that game in the bag. Both teams performed quite well for the 1st half. At one point in the 2nd half, Wisconsin was up 48-39, which is a 9-point lead, so it looked like the Badgers WOULD win the game. Unfortunately, the Blue Devils would make a comeback in the later part of the 2nd half, and within the last 5 minutes, Duke took the lead for the 1st time in the second half, and the Blue Devils would end up winning 68-63.

See what I mean? Now I bet many Badger fans were shocked when the Badgers lost the game as they were so good.

So remember-the next time Wisconsin plays in a national championship game, be sure to give them real support (unless, of course, you’re fans of thee the team instead). But, even if the don’t make it all the way this year, there are always the years after that, also.

Well, this post is finished. Again, don’t forget to root for the WISCONSIN BADGERS in their next several games!