Finally, the moment you’ve been waiting for-the ZOLTAN fortune-teller’s post. The video down below talks about ZOLTAN. I used this video in my last post, and it recycled for this post as well.

Now, although the video above tells you pretty much about the machine, here’s the story about it:

This fortune-teller was built way back from 1969. In this machine, Zoltan wears an orange and yellow hat with orange and blue flaps through the sides. On the top of the hat there is a yellow circle with a smaller, red circle in the middle. He wears red, long-sleeved shirt with yellow sleeve-ends and a yellow collar. He also has gray eyebrows, a gray mustache, and a gray beard. Here, he is seen putting his hands around a pure-white crystal ball, and his head appears to be looking down at it. 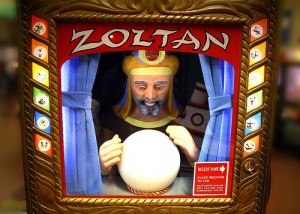 The thing with this machine is that Zoltan is not mechanical or animated, which means he does NOT move at ALL. He CAN speak, however.

ZOLTANs are smaller than the ZOLTAR SPEAKS fortune teller I talked about in 2 previous posts.

OKAY, here’s how use the machine:

You insert a dime, or 10 cents, into a hole on the front side to the right. Right below the coin slot, there is a little black telephone attached to the machine. You then pick it up and place it next to your ear. On the bottom of the front part of the box, you will see a row of little circle signs that are all different colors. On the bottom of each circle sign, there is a small, red button. You then press just one of those buttons, and then the crystal ball lights up, and Zoltan will start speaking. Zoltan tells you your fortune. When he is done, he will stop speaking, his crystal ball will stop lighting, and you place the phone back.

BUT…..ZOLTAN wasn’t the ONLY thing reviewed in this post. All above this paragraph was the ZOLTAN fortune-teller. Below talks about something different. I’m making this second part because today was something special.

Yes, you’ve guessed it, today was the last day of summer vacation. It’s kind of sad to see the that the no-school, summer season ended already :(. But I am glad I got to do many fun things before it ended :). Now my older brother Jake now lives in Boonville, Missouri, and my other older brother Aidan now lives in Seattle, Washington. One fun, summer memory of this year was that in late July, Me, My Parents, My Grandpa Jack and Aunt Sue, and Grandpa Jack’s friend Barb all went on a trip to Milwaukee, Wisconsin for 4 days. We went to a Brewers game, climbed a lighthouse, and went to the public museum. It was also fun helping my older brother Jake move to Boonville, MO, in early August as well :).

However, the end of summer wasn’t the only thing that was definitely a bummer for me today. In just 4 months from now, it will be my birthday. Yes, I know, birthdays are normally fun. But here’s the thing: I am 12 years old right now, so that means on my NEXT birthday, I’ll turn 13. You usually become a teenager after you become 13 years old, and If i’m a teenager. But after that, I will become too old to do activities for 12 year olds and younger, like I have done in the past.

Another thing that made me sad today is that I was going to record several “GO, DIEGO, GO!” episodes, but believe it or not, we don’t have the NICK JR. channel at our house anymore. It turns out that our Charter channel rate was too expensive, and to stop that, Mom and Dad got rid of a “Package” of channels. But we didn’t know that NICK JR. was in it. When I first found out that we no longer had the NICK JR. channel, I shedded tears because of how much I loved that channel. Mom sent Dad a text message about what we had discovered, and he wrote her back, but instead of bring back the original channel, he said we would look up several saved NICK JR. episodes on AMAZON, NETFLIX, and HULU. It didn’t want to follow Dad’s new plan and instead wanted to get the original channel back.

Maybe watching the NICK JR. shows from the special computer programs wouldn’t be so bad after all. They would be there the whole time, so I wouldn’t have to worry about deleting them. Also, there would be almost every single NICK JR. on there, so I could watch ones I never even recorded. Plus, even I don’t wanna watch things on the computer program, I could always go and watch some on my DVR recordings.

Dad changed his mind after seeing how much I would miss the NICK JR. channel more, and he HAS brought it back!

Also, I don’t know if you guys know this, but at the Whitewater Middle School, they serve pizza for lunch EVERY DAY. Of course, they have other things I like there, also. On days they have those other things, I would take those, but on days they did NOT have those things, I would go and buy pizza, which I LOVE, so this means Mom won’t have to pack me a lunch anymore.

Plus, I still have Sundays and Saturdays off from school (of course everybody knows that), and well as Winter Break and Spring Break, which are both a week long. I would also have occasional days off as well, and you never know; we just MIGHT have SNOW DAYS off, too!

I guess I can tell my fortune ahead of time, even WITHOUT using the fortune-telling machines like ZOLTAN, but I still think they’re all very cool!

Well, that’s the end of the post. Again, a farewell to this year’s summer vacation, and I’ll be catching you soon with some more posts and updates this fall.