Remember how I said I would do a post NEXT weekend? Well, it’s being made THIS weekend. Sorry, but with so many events going on and me being tired, I haven’t been making much posts these days.

On September 30, 2004, Japanese Scientists went on a 5-ton fishing boat to the ocean, with sperm whales leading their way.

They then lowered a line to 3,000 feet under the ocean. The line had a camera, 2 hook traps, and a fish bait.

They had did this 23 times in the past. Then, at 9:15 A.M., a Giant Squid 26 feet long appeared, and attacked the lower hook trap. That was a mistake. After it ate the bait, one of its tentacles got caught on the hooked trap, and couldn’t get free.

For the first 20 minutes, the squid pulled trying to get away. For the next 80 minutes, it spread its arms widely, and attacked the lure. During this time, it swam upward to 600 meters under the surface. Over the next 3 hours, it slowly returned to the deeper zone, to the death of 1,000 meters under the surface. During this time, it again pulled trying to get away. 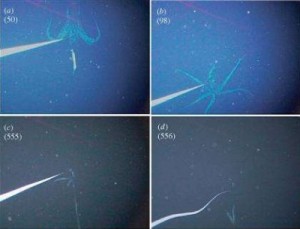 That’s it for this post. I’ll (for sure) do another post (or maybe even a few) over winter break.