Well, it’s the last weekend of September 2015. In just a little more than 3 months from now, after 12 long years I will finally become an teenager. It’s an interesting feeling, but I enjoyed the years before that too. I wanted to share some fantastic and some sad past times from the previous years, so this will be kind of a long post.

In June of 2011, most of my family and I went on a cruise trip for 10 days. On June 17, my parents, brothers, and I left our house and flew over to New Jersey. On June 18, we went to a Thomas Edison museum. On June 19, we all boarded our ship called the MS VEENDAM, and it left New York. On June 21, it reached a series of islands called Bermuda. On June 22, Mom and I went on a tour using a glass-bottom boat. On June 23, we went on a little train (it wasn’t much of a train, really, it just a machine shaped like one) and we went to a ocean museum. On June 24, the MS VEENDAM left Bermuda. On June 26, it reached New York. We all got off and went back to the Hotel in New Jersey. Mom took me to a New Jersey playground later that day. On June 27, my parents, brothers, and I flew back home to Wisconsin. 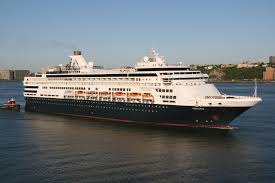 Also, my older brother Jake went on a trip to South Africa during 2014 (I THINK because he could do a school project but I don’t exactly remember). He also got me a South Africa rugby hat. Jake left Wisconsin on August 13 and returned on December 2.

Every spring, my parents and I fly south to Florida to visit my Grandpa Jack. We don’t go to Orlando, however; we go the the Pelican Bay in Naples. We also take trips to the Kalahari Resorts at the end of January as well.

Now, there are not many Wig-Wags left in Wisconsin. One of the Wig-Wag signals from the past was in Blue River. Down below us a photo of it. 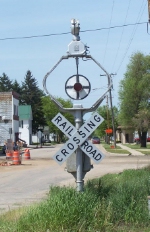 But later that same year, the workers did some work at this very spot….

Yes, this crossing has gotten a huge upgrade within the last few days or so. The road was re-paved, and the weeds were cut down. But I’m sure the saddest change of all is that the Wig-Wag was torn out, and a crossbuck and a stop sign on a wooden post was installed in place of it. Nothing signal related remains here any more, since the other side had a crossbuck and yield sign. But on the other hand, I think the new sign is in good condition and will serve proudly. And yes, I must admit, the road looks much better than it did back on May 23.

Last month (in August 2015) the Google Maps crew drove past here to find that both signs were still there.

Notice one the the buildings in the background has been demolished. Blue signs that tell the emergency number have also been added.

It seems to me that even though the signs are both still in excellent shape, there’s still a void with the Wig-Wag gone for almost 9 years.

In case any of you guys wanted to know what Wig-Wags are left in Wisconsin, there are 3 in Plymouth, 2 in Sheboygan, and 2 in Baraboo.

Remember in the post before my last one that I said there were 2 Wig-Wags on Yahara Parkway in Madison? Well, those are torn up now. When I grow up to be a man, I could possibly build my OWN Wig-Wag signals and install them at the crossing #2. I could also make Griswolds (Griswolds are these old-fashioned signals that have flipping stop signs) and install them at the crossing #1.

In Whitewater, there is this huge apartment building called THE ELEMENT that the university students use. 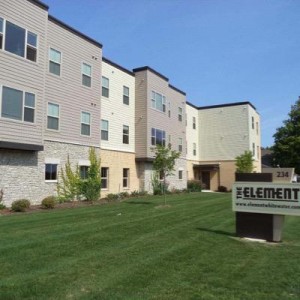 There’s an interesting, but sad story upon this location. I kind of talked about this in an earlier post of mine, too. Several years ago (before 2011), there used to be a chapel here called Calvary Lutheran Church. Sadly, in mid 2010-2011, the church was sold to another company, and was completely torn down. The workers built this apartment area in place of it.

In downtown, there used to be a place called WALL CRAWLERS. If you went inside, you would see a huge, rock climbing wall that the big kids could go on. However, in the year 2010, due to the owner moving back to Colorado, the WALL CRAWLERS gym was closed and turned into part of Jessica’s Restaurants.

I’m sure when I get older, I could team up to bring back the WALL CRAWLERS rock climbing gym. I’m not sure about the Calvary Lutheran Church, however.

I could also become a cartoonist in the future, too!

But on the other hand, once I turn 13, I’ll be too old to do attractions for ages 12 and younger. But despite that, Mom says I’ll STILL be a kid. She states that Teenagers are just older kids, and that I won’t really become an adult until I’m 18. Man, that sure makes me feel better!

Plus, I’ll be old enough to do PINTEREST! You must be at least 13 years old to sign up, so that means next year I can look at their photos!

Plus, when I was much younger, I used to want to be big instead of little. Well, I’m not really much of a little guy anymore, although I’m pretty sure when I’m an adult, I’ll REALLY be an old guy.

Plus, I used to watch little preschool shows all the time when I was younger. Believe it or not, I have a lot of toys for younger children, and I still record lots of preschool shows on our DVR. I usually look up preschool stuff on the internet. Man, I can’t believe I’m still liking these things after all these years; Mom and Dad even say I can still have them for a really long time!

Although my childhood days will be missed, I’m looking forward to growing up and having a wife and kids!

Well, that’s the end of this post. I’ll try to enjoy the last 3 months before I become a teenager, but in the meantime, stay tuned for my next posts!