Sorry I didn’t do any posts for March or April, but I’ve just been more busy with my “plans and other things”. This will be a pretty long post, so be prepared.

You presumably know Nickelodeon, as well as it’s preschool block and sister network Nick Jr. Though, the Nick Jr. channel you see today was rather different when it first launched 19 years ago, with a pretty different name, main target audience, and even ownership. The block, however, has ALWAYS been under the Nick Jr. title, and it was around 11 years before the channel was. This post will now be more specific with you on that…

The Nick Jr. block launched on Nickelodeon on January 4, 1988. 7 years later in 1995, the Children’s Television Workshop began plans for its own educational channel. The channel would feature several of its programs other than the famous Sesame Street. At first, channel was going to be called “New Kid City”, but soon that plan was withdrawn. But a few years later, the CTW teamed with Viacom to make another attempt to launch the channel. This time, the new channel would be known as “Noggin”. Noggin would feature several children’s programs that “had the goal of positioning programs at the forefront of the digital cable movement”.

And, on February 2, 1999, Noggin finally launched at 6 in the morning. The first ever program to air on the channel was the pilot episode of Sesame Street from 1969.

After that, the first few episodes of The Electric Company from 1971 aired on Noggin. At the time, those episodes had not been broadcast in more than two decades. 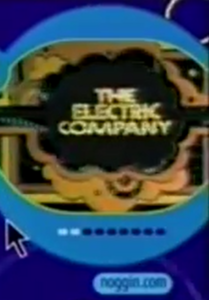 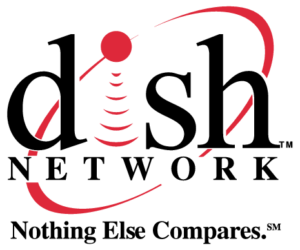 Anyway, during the channel’s first three years of service, most of its programs were aimed at pre-teens. Shows like 3-2-1 Contact, Bill Nye the Science Guy, and Square One Television aired on the channel. 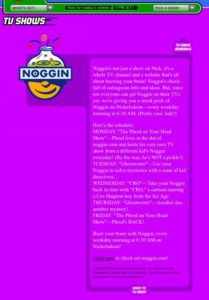 What was bizarre about the channel, however, some its programs were aimed at preschoolers. Shows like Allegra’s Window, Gullah Gullah Island, Maggie and the Ferocious Beast, and Kipper, aired on Noggin during its first 3-year run as well. 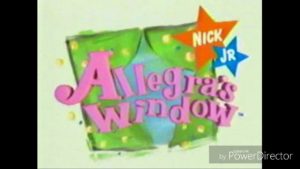 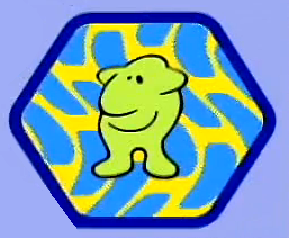 However, Noggin’s ratings had gotten low. So on April 1, 2002, the channel went through some major upgrades…

At this time, Noggin got new shows, like Tiny Planets, Play With Me Sesame, and Blue’s Clues, and other preschool shows.

But that some day, a new nighttime programming block called The N was launched on Noggin.

The N was a network that broadcasted programs aimed for older audiences than Noggin, Nickelodeon, and Nicktoons. Noggin and The N shared time space with each other: Noggin ran from 6:00 AM to 6:00 PM Eastern Time, while The N ran from 6:00 PM to 6:00 AM Eastern Time seven nights a week.

Also on April 1, 2002, Noggin removed Phred and replaced him with a new mascot named Feetface.

Every day when Noggin signed off, it showed a message that Noggin would be back at 6:00 AM the next morning. Down below is what Noggin showed when it signed on during its first year as a time-shared preschool service.

A few shows that were on Noggin during its pre-teen service, like Sponk! and A Walk in Your Shoes, moved to The N. 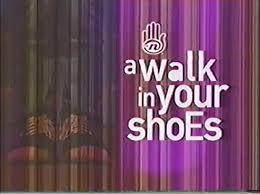 That same year, Sesame Workshop’s rights to the channel expired and Viacom gained full control of it.

Noggin used Feetface just fine for almost a year, but on March 8, 2003, trailers featuring Moose A. Moose and Zee began…


At 6:00 PM Eastern Time on April 6, 2003, Noggin signed off with Feetface for the last time. Kipper and Allegra’s Window were dropped from the schedule as well. When Noggin signed on the next day, Moose and Zee took over as Noggin’s mascots. Also, six new shows premiered on Noggin: Bob the Builder, Coonie the Cow, Oobi, Dora the Explorer, Tweenies, and Miffy and Friends.

Beginning then, Noggin used the “Fantastic Day” song whenever it signed on…

…and the “Done Day” song whenever it signed off.

In April 2004, Gullah Gullah Island was pulled from Noggin’s schedule. In the next month, it was announced that Tiny Planets, which aired as 5-minute segments in shows, would get expanded into a half-hour show due to popularity. On May 31, 2004, the Tiny Planets expansion took place, and Tiny Planets was then broadcasted on the 7:30 AM slot. At that time, Noggin also added Rubbadubbers to its lineup. 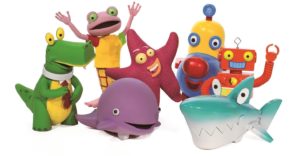 In early September 2004, Noggin added Lazytown to its lineup as well. 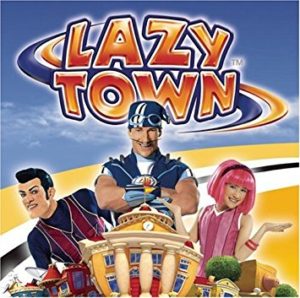 That same year, Noggin began broadcasting the annual Worldwide Day of Play, as with all of the other Nickelodeon Channels. 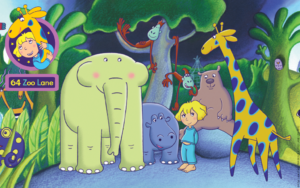 The Goodbye Song was last used for a while on June 19, 2005. The following evening, it was replaced by a new sign-off segment called “See What That Cat Is Up To”. 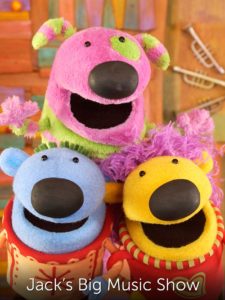 At that time, to allow more shows, Tweenies moved to the 6:00 AM slot (the first show slot of the day on Noggin). In November of that year, Miss Spider’s Sunny Patch Friends was added to Noggin’s lineup. Down below is a series of Noggin shows recorded from 2005.

On March 23, 2006, Noggin added The Backyardigans to its lineup. That same day, Noggin began advertising for a new show called Pinky Dinky Doo, which premiered in the UK nearly a year earlier. 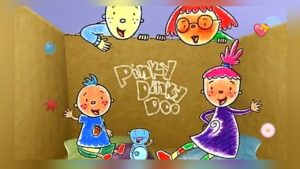 On April 10, 2006, Pinky Dinky Doo made its premiere on Noggin. Then, Tiny Planets was finally pulled from Noggin’s lineup.

On July 4, 2006, “See What That Cat Is Up To” was used for the last time. The following evening, the “Done Day” song returned. Later that year, Noggin added new Nick Jr. shows like The Wonder Pets and Wow! Wow! Wubbzy to its lineup.

In August 2006, Noggin began advertising for the short-lived The Upside Down Show. 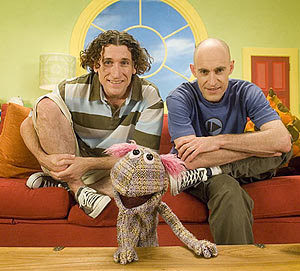 On October 6, 2006, The Upside Down Show premiered on Noggin.

On April 2, 2007, Noggin got a minor upgrade. It was renamed as Nick’s Noggin now that it was carrying more Nick Jr. programs. At this time, Bruno, Connie the Cow, and Miffy and Friends were pulled from Noggin’s lineup. Also, Play With Me Sesame moved to the 6:00 AM slot.

That year, Viacom decided that Noggin and The N needed to be separate channels. By then, Nickelodeon GAS, the sister channel of Nickelodeon, Noggin, Nicktoons, and The N, was only airing an automated loop of old Nickelodeon game shows.

Finally, on December 30, 2007, after the Little Bear episode “Emily’s Visit”, the old timesharing version of Noggin signed off for the last time.

The last program to air on the 12-hour version of The N was the Degrassi: The Next Generation episode, “Do You Want Me, Part 2”, followed by the music video of “Love Song” by Sara Bareilles. After that, when Noggin signed back as a new 24/7 service, the “Fantastic Day” song was not shown, instead it went straight into a 64 Zoo Lane episode.

At that minute, Nickelodeon GAS had just showed an episode of Figure It Out. It then aired a bumper, followed by a longer one, but the longer bumper was cut hallway through when it switched to The N with the pilot episode of Instant Star.

That evening, Noggin hosted a movie marathon in honor of getting its 24/7 back.

On February 24, 2009, it was announced that Noggin would rebrand as Nick Jr. and The N would rebrand as TeenNick. It was said that it was to fully bring both channel with the Nickelodeon brand. But even 2 months after this announce, Nickelodeon GAS and the timesharing will still kept on Dish Network. Would Noggin and The N timeshare as Nick Jr. and TeenNick on Dish Network?

On April 22, 2009, as part of a minor channel shuffle, Dish Network announced  that the Pacific Time Zone feed of Cartoon Network and Adult Swim on channel 181 would move to channel 177 (the channel Nickelodeon GAS was on) and take Nickelodeon GAS’s space. At first, no one thought it would happen, but at 3:30 the next morning, Nickelodeon GAS had finished airing an episode of Legends of the Hidden Temple and had just aired a bumper when it switched into the Pacific Adult Swim with an episode of Squidbillies.

WARNING: The program Nick GAS switches over to in this video has a TV-MA rating.

So from there, Noggin and the N did get their 24/7 services on Dish as well, even if it was after their rebrandings were announced.

Anyway, on June 18, 2009, Nickelodeon unveiled the new logos for these channels… 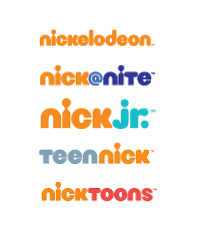 Finally, at 6:00 AM Eastern Time on September 28, 2009, Noggin and The N officially became Nick Jr. and TeenNick. When Noggin become Nick Jr., 64 Zoo Lane was pulled from the channel’s lineup.

It’s not like the channel actually rebranded, however. The channel kept its same shows and designs. It even kept its mascots, Moose and Zee! It’s typically only the name that changed.

On February 5, 2011, Peppa Pig, which had been airing on Nick Jr. as 5-minute segments between shows since Noggin’s 24/7 service returned, got its own half-hour show. On April 8, 2011, Pinky Dinky Doo was pulled from Nick Jr.’s lineup as well. On July 19, 2011, Pocoyo, which had been airing as 7-minuted segments between shows a for year, was expanded into its on half-hour show.

In November 2011, Viacom announced that in the 2012-2013 television season, a new block named NickMom would launch. The new block would be aimed at mother audiences.

There were originally plans for a NickMom version of the sign off message from when Noggin switched to The N. But on February 29, 2012, Moose and Zee appeared on the channel for the last time…

Some shows that were on Nick Jr. got pulled from this retheming, but a few of them returned to the lineup later that year.

On September 9, 2015, due to a 2015 Viacom cutback and low ratings, NickMom announced that it would shut down at the end of the month. On September 28, 2015, NickMom went off the air for good. Therefore, Nick Jr. once against become a 24/7 service.

The channel has not really gone through any upgrades since then, but it has been dropping old shows and adding new shows, respectively.