In Tom Hanks’s 1988 movie BIG, as you probably know, there is a fortune teller machine named ZOLTAR SPEAKS. ZOLTAR Speaks is a machine that grants your wish for a quarter by getting the coin into Zoltar’s mouth through a ramp, and he makes breathing noises. 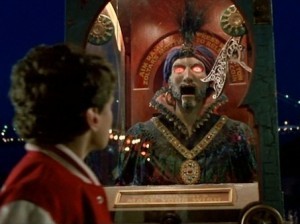 And yes, I have heard there a series of ZOLTAR FORTUNE-TELLER machines, but in my opinion, they look nothing like the one in the film. 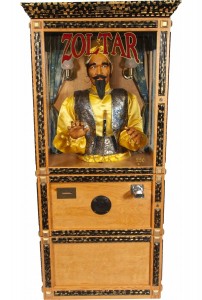 Plus, they don’t even grant a wish at all. They just speak and tell your fortune through a crystal ball.

Also, there is another fortune-telling machine way back from 1969, named ZOLTAN, and that’s clearly not Zoltar either. 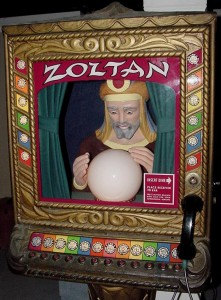 Zoltan does not move at all; he just speaks and his crystal ball lights up. ZOLTANs insert dimes, not quarters.

Also, as of August 2009, there is a ZOLTAR SPEAKS in some unknown amusement shop-as you can see here in this YOUTUBE video posted by BILLYBOBANDCOMPANY. Yes, this ZOLTAR SPEAKS makes a few differences to the original. If you listen carefully, you will hear that this Zoltar fortune teller laughs instead of breathes.

Plus the original ZOLTAR SPEAKS prop used in the film is on static display at the FALCON THEATRE in Burbank, California. I’m sorry to say, this ZOLTAR SPEAKS is on display only and today does NOT grant wishes. 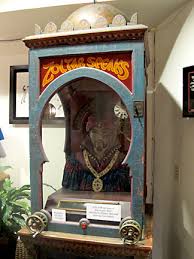 Now after all that I’ve went through, I bet you’re wondering where you can find a working ZOLTAR SPEAKS that’s just like the one in the film. Well, there’s only one place on Earth where you can find one, and that’s at the Kilroy’s slot machine store in Minneapolis, Minnesota, USA. 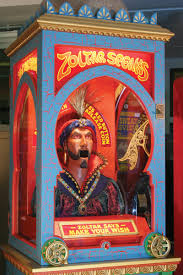 For those of you who are curious, here’s the Kilroy’s address:

The man who build his machine is this guy named Roger Hess. I must report that the Vintage Brooch, Fabric, and Oval Pendant are different from the original, the head is little bit shorter, and the sun circles by and on the other side of the ramp are missing. Other than that, it’s like the movie version. 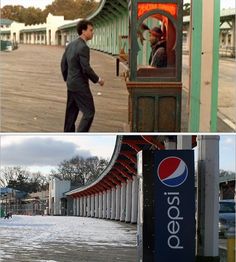 RYE Playland in New York is the famous final scene of ZOLTAR SPEAKS, and as you can see in this photo, a PEPSI machine is in place of the fortune teller. I have heard there is a newly-upcoming children’s museum there and they want to have a working ZOLTAR SPEAKS machine in the museum. They’re looking at several options, as well as having one custom-built by the Company that made the prop from the movie. I’m sure they’ll figure it out at some point.

That’s all I have for now, and I’m sure I’ll be seeing you guys again soon with some more posts.