There once was a place called WALL CRAWLERS next to Jessica’s restaurant. It was used by the boy scouts during their activities. It had this huge, indoor climbing wall that the boy scouts could go on. Dad and my older brother Jacob have been to it 5 or 6 times. Mom and I have been in it only once. Google Maps showed photos of it in October 2007 and again in September 2009.

Those street views show it back then-open and operating. But in 2010, since no one wanted to be the leader anyone, boy scouts ended. The guy who owned the place even moved back to Colorado. So WALL CRAWLERS was closed and the site has been part of Jessica’s the past 5 years or so. Down below is the new Jessica’s part viewed from October of 2012.

And plus, since boy scouts has now ended, I don’t go in their church anymore. It has this little play area with all these little preschooler toys. I went to this area every time we went there. I have some nice memories of playing in there.

Speaking of churches, there was this church the university called the CALVARY LUTHERAN CHURCH. Down below is a street view of it from October 2007.

But then, around 2010, it was sold, and was demolished. The church was torn down at about the same time WALL CRAWLERS and the boy scouts went away.

The church was replaced with this university student apartment building called THE ELEMENT.

And here’s the last thing: just southwest of Whitewater is the town called Lima Center, which is barely a town at all. Once, at its main railroad crossing, there was this wigwag signal. Down below is a few pictures of it, followed by two videos of it in action. There is also a another video of the wig-wag before these two, and i WOULD have posted that on my website as well, but unfortunately, that one has been disabled by that Youtube channel. My guess is it’s because it is the first of those videos, so it is the most important to him, and he would like it to remain on youtube only to make it more special to see it. Though of course you can still it see there. 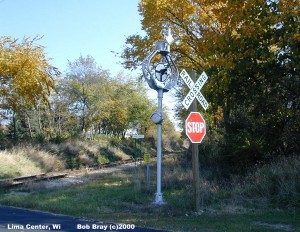 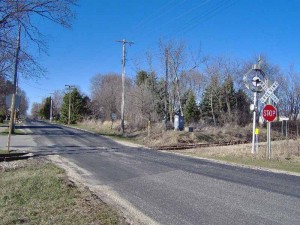 Notice that the banner is missing its top stripe and that there is no crossbuck on the signal since there is a crossbuck and a stop sign in front of it. That was also the only signal at the crossing. The other side only had a few crossbucks and stop signs.

But then….in early August of 2011, someone went to the crossing to find out that…. 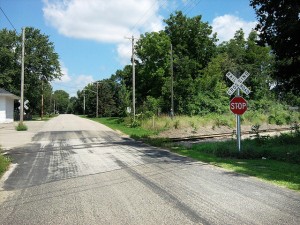 Yes, you see it right; the wig-wag at this crossing has been removed. Nothing signal-related remains here anymore. According to Dan’s WigWag site, the WigWag had been removed earlier that year, although it was said to have been stolen.

All these old things were very good to us. I wish they were all still there, but I guess I can’t really do anything about it right this minute.

Well, that’s the end of this post. My next post will be published next weekend. Stay tuned!